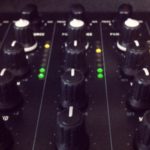 Correctly setting DJ mixer level controls is one of the most important contributors to creating an excellent sounding system. Once you master the fundamental principles you'll know how to get the best possible audio quality from your Rane DJ mixer. To ensure proper level setting, Rane DJ mixers are designed with a professional audio metering syste much like you’d find in a studio grade mixing console. If you’re familiar with pro-audio mixing consoles, Rane DJ mixer metering will be a no-brainer, but if this is your first introduction to professional audio metering it may be a bit different from what you’re accustomed.

DJ mixers have a lot of level controls (wouldn’t be much of a mixer without them). Knowing the proper setting for each control is a bit confusing, especially when adding a software program to your system. Luckily, audio software and DJ mixers include similar controls. Both include individual gain/trim controls, level meters for each channel, and a master output level control.

Follow the golden rule and keep your level meters out of the red. Think of a level meter as a traffic light. Green means you’re ok to proceed, yellow means caution and red means stop. Your goal is to turn the gain controls up so that your level meters are peaking in the high yellow- almost to red but not quite. When level meters hit red, you run the risk of clipping or simply distorting the heck out of the audio. In case you’re wondering, both sound terrible.

Rane mixers use Quasi-Peak meters with peak hold. What the heck is quasi-peak you ask? Quasi means, having a likeness to or resembling something, so quasi-peak refers to the peak-like meter function of the Rane meter. The fast responding quasi-peak value (lower portion of the meter) shows you what signal is doing real-time, relative to the dynamic range of the mixer. Audio transients can be relatively fast, making it easy to miss brief overload events, so the meters are designed to hold the maximum value for at least half a second (top portion of the meter).

Like other peak hold meters, the ones found on Rane DJ mixers will appear to have gaps between the average level and the peak levels. This can throw DJs off at first, thinking the meters are malfunctioning, but this is not the case. The LED floating above the rest represents the peak level of the audio and the LEDs below the peak represent the quasi-peak audio level.

The basic idea behind using peak hold meters is identical to using peak meters; keep the top meter out of the red. Using the PGM gain controls on your mixer, adjust the level so that your meters barely hit the red and then back the level down until out of the red. Repeat this process for each PGM channel.

The main difference DJs may notice about the master output level meter is that the master level control has no affect on the meter levels (see above picture). This may seem a bit weird when compared to other DJ mixers, but there’s a very good reason behind this design. With Rane professional DJ mixers, the master output level meter is the summed total of all PGM channel levels. In other words, the master output meter is a true representation of your combined output mix level. As long as the output level meters stay out of the red, you won’t be in danger of clipping or distorting audio, not that you can clip or distort a Rane mixer anyway, but that’s beside the point. You can still blow the sound system speakers (and your chances of getting booked to play that venue again).

Calibrating Your Rane Mixer With a Sound System

It was mentioned earlier that the main level control has no affect on the master level meter, and this is by design. The design intent is to use the master level control to calibrate the mixer with a sound system. Ideally, during sound check, the sound tech running the sound system will calibrate the system to the output level of the Rane mixer, so that red meters on the mixer indicate red (or almost red) on the main sound board and/or near clipping of the amplifiers.