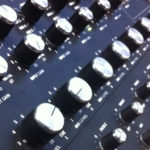 In 1999, Rane released their first rotary DJ mixer, the MP 2016. Modeled after the popular Urei 1620 and the legendary Bozak CMA line of rotary mixers, absolute favorites within the House Music community. The MP 2016 was designed to fill the rotary mixer void created by the late great Bozak mixer series and the discontinuation of the Urei 1620 in 1993. Just like Urei mixer before it, the MP 2016 is a classic styled rotary mixer featuring six stereo Input Channels with Booth and House Outputs. Also providing Tape Outputs, Effects Loop, and headphone cueing. But to meet the changing needs of DJs at the time, the MP 2016 boasted new features never-before seen on a rotary DJ mixer.

Coupled with the release of the MP 2016 mixer, Rane offered the optional XP 2016 External Processor. The XP 2016 was a brilliant addition to the rotary mixer world giving DJs, with the flip of a switch on the MP 2016 front panel, 3-band, isolator tone controls for each channel, A-Post-B Crossfader assign switches for all six channels, a high-performance Active Crossfader™ with full range Contour control, and a stereo 10-segment peak dBu Master/Cue Meter.