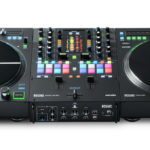 Having won a variety of World and regional titles across the globe at the class leading main stage competitions like DMC, Red Bull 3Style & the Goldies, the SEVENTY-TWO has proven itself time after time in extreme high-pressure performances to give DJs the winning edge. With its robust solid build and reliability, paired with its unrivalled integration into Serato DJ Pro, it’s no surprise the SEVENTY-TWO is the champions’ choice of mixer.

The SEVENTY-TWO MKII carries all the world-class performance capabilities and components as the original version, but adds more winning features to take it one step further. First, an external crossfader tension-adjust has been added, giving DJs full control over the feel of their crossfader. Additionally, the SEVENTY-TWO MKII is fitted with three new ultra-light MAG FOUR faders (link to MAG FOUR PDP). This new high-quality design is our lightest and smoothest fader yet. The SEVENTY-TWO MKII also allows DJs to customize the parameter controls to act as either Silent Cue, Instant Doubles or Sync control, while the DVS input option has been expanded to include the Aux input as well as the Phono/CD input for more flexible set ups.

Find out more about the SEVENTY-TWO MKII

Our TWELVE MKII is next evolution in turntable controllers. A simple, yet hugely powerful motorized DJ control system. The TWELVE MKII has all the characteristics and simplicity of a traditional turntable, but without the hassle of fragile needles and skipping tone arms. The TWELVE MKII delivers a true vinyl-like experience to keep DJs grounded in the art of DJing while allowing them to take full advantage of the creative performance options available in today’s digital world.

The TWELVE MKII makes its mark by expanding its control possibilities to Traktor and Virtual DJ users via USB Midi or DVS Audio, or a hybrid of both, in addition to the previously supported Serato DJ Pro. Add in more navigation, instant doubles control and a new plunger-style Start/Stop button, the TWELVE MKII broadens its legacy control. The vinyl experience is also fully customizable by adding your favorite slipmat. With the TWELVE MKII, the DJ can scratch and play with all the direct spontaneity and creativity of a turntablist, but with the precision, repeatability and durability of the best digitally-based solutions. The TWELVE MKII is the very best of both. And with its all-metal body, the TWELVE MKII is built like a tank, but has all the agility needed to compete on world stages. There is simply nothing else like it, anywhere.

Find out more about the TWELVE MKII