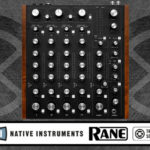 Setup is easy with the MP2015's class compliant Core Audio drivers for Mac. Windows users simply need to install an the included ASIO driver. The MP2015's control surface is MIDI mappable to Traktor giving you software control directly on the mixing console. Traktor isn't bundled with the MP2015, but it is available for easy download from the Native Instruments website: www.native-instruments.com

The #futureofdjing has never been so bright!

TRAKTOR PRO 2.8.0 contains some substantial changes to the core of the software, along with numerous other feature enhancements, improvement, and bug fixes. The list below provides a comprehensive overview of all changes since the last public release (TRAKTOR PRO 2.7.3) including the improvements in the two Public Beta releases (TRAKTOR PRO 2.7.4 and 2.7.5):

TRAKTOR PRO now has 64-bit architecture. By making TRAKTOR PRO a 64-bit application, it allows TRAKTOR PRO to access all the available RAM on computers with 64-bit operating systems; previously, TRAKTOR PRO could only access a maximum of 2GB of RAM regardless of how much RAM was actually installed and available on the computer. By giving TRAKTOR PRO access to more RAM, it will increase performance of the software by allowing management of more items (larger Track Collections, more Remix Deck samples, better playback caching, etc.).

TRAKTOR PRO now features full Automatic Deck Flavor Switching for all users; previously, this was only working when loading items via the KONTROL S8 Browser. Now, loading or dragging a Track or Remix Set onto a Deck will cause the Deck to automatically switch to the appropriate flavor to play the content.

Also new in this version is a special analysis mode called “Parallel Processing”. This option can be found at the bottom of the Analysis window which appears when you right-click on tracks and choose “Analyze (Async)” from the context menu. If you enable the Parallel Processing checkbox before clicking “OK", TRAKTOR PRO will then use multiple threads to process many tracks simultaneously. Our tests show that processing a large collection of files can now be done three times faster with this option enabled. Be aware, however, that TRAKTOR PRO will use lots of your computer’s resources to do this and it may affect playback of tracks. We therefore only recommend using this feature in an offline situation rather than during a live performance.

TRAKTOR PRO 2.8.0 supports the new KONTROL D2 hardware controller. The D2 will be officially released on May 4th, 2015.


NOTE: Backspins are enhanced by the fact that TRAKTOR PRO will stop the spin as soon as you release the SHIFT button. You can therefore perform a backspin effect for 2 beats by turning on FLUX mode, holding SHIFT, and swiping backwards on the Touchstrip. Two beats later, release the SHIFT button and the spin will stop and normal playback will resume right on the beat you desire.

When enabling Beat Grid Edit Mode on the KONTROL S8 or KONTROL D2, the left-most Performance Button will now be active. Pressing this button will zoom in on Beat 1 allowing you to set the position of the Beat Grid with greater precision. Press the button again to exit the zoom.

When in Beat Grid Edit Mode on the KONTROL S8 or KONTROL D2, the two center Performance Knobs are used for adjusting the Tempo of the Beat Grid—the left knob is a coarse adjustment while the right knob is a fine adjustment. The new improvement is that these knobs are scaled based on the viewing position of Beat Grid Edit Mode so that adjustments made far away from the Grid Marker don’t result in abrupt changes to the waveform position. For example, if you are near the Grid Marker at the start of a song and change the Tempo of the Beat Grid, you will see the waveform move under the Beat Grid by a particular amount. If you then scan later into the track, adjusting the Tempo will create a similar amount of motion on the waveform (rather than a large amount of motion) thus allowing for precise setting of the Beat Grid Tempo over the length of the song.

We've added a new feature to KONTROL S8 (which is also available on KONTROL D2) that allows you to use the Performance Knobs, Performance Buttons, and the Performance Faders below the Displays as MIDI output controls. You can therefore use these controls to send MIDI messages to other software or external gear. This feature is not enabled by default and requires some configuration, detailed in release notes.

Full native support for these two Pioneer players, including all available new functions provided on the XDJ’s touch screen interface, is now integrated into TRAKTOR PRO.

The Rane MP2015 rotary mixer is now Scratch Certified and can be used as an audio interface for TRAKTOR PRO in conjunction with Timecode vinyl and/or CDs.

Beta #2 also had a problem with playback of long M4A (AAC) files in the 32-bit version of the application. This has been fixed.

Beta #2 could have high CPU spikes when used on some low-performance systems. We have made a change which prevents this.

We fixed a problem where TRAKTOR PRO would unnecessarily update the tags of tracks which are in the Preparation List at startup.

An issue was reported where TRAKTOR PRO could hang when accessing the Explorer node of the Browser Tree. This issue has been fixed.

At the same time, we also fixed an issue that could cause TRAKTOR PRO to crash when opening an Archive folder containing over 2500 .nml files.

We fixed an issue where TRAKTOR PRO would unnecessarily update all file tags when clicking on a Playlist .nml in the Explorer node of the Browser Tree.

We also fixed an issue where TRAKTOR PRO would unnecessarily update file tags when deleting items from a Playlist.

We fixed the CPU Load spike that can sometimes occur when engaging Keylock or Filter for the first time.

There was a problem where you sometimes couldn't re-order tracks in a Playlist without first clicking the "#" column twice and this has been fixed.

The Battery Indicator in TRAKTOR PRO's header was broken on some 64-bit systems and wouldn't show the battery level. This is now fixed.

An improvement has been made to MP4 (AAC) audio handling on Windows which should remove crackling during playback of these file types.

This version contains a fix for some crashes on startup which were part of the first Beta (2.7.4)

There were also reports of crashes or hangs on shutdown on some Windows systems and we have made a fix for it.

A bug was reported in 2.7.3 where a Deck would stop when loading a track into the playing Deck regardless of preference settings. This issue has now been fixed—loading a track into a playing track will leave the Deck playing so you immediately hear the newly-loaded track.

We also fixed an issue where jumping out of an Active Loop via a HotCue would disable the Loop—the Loop will now remain active when doing this just like in TRAKTOR PRO 2.6.8.

Fixed a problem where memory corruption could occur when browsing and sorting the Explorer node under very specific conditions with the S8 or D2.

Lastly, we fixed two issues which occurred when making changes to tracks (such as changing the track Rating) in the Explorer node while that same track was already playing in a Deck; doing so could result in the analyzed tempo being lost (causing the track to fall out of sync) or removal of the “played” checkmarks from the track. These issues should no longer occur.

Controller Editor has been upgraded to version 1.8.0.262 to support KONTROL D2 in addition to other improvements and bugfixes.

Native Instruments is a leading manufacturer of software and hardware for computer-based music production and DJing. The company's mission is to develop innovative, fully integrated solutions for all professions, styles and genres. The resulting products regularly push technological boundaries and open up new creative horizons for professionals and amateurs alike. www.native-instruments.com