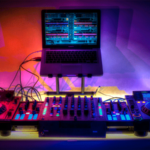 Are you a fan of the Rane Sixty-Four and/or Sixty-Two and its tight integration with Serato software but prefer using Traktor? Fear not, we're here to make your life a little easier by sharing a mapping we whipped up which gives you control of Traktor's main functions right at your fingertips.

What you may or may not need

The Sixty-Four and Sixty-Two are not certified Traktor mixers but that doesn't mean a Traktor user can't reap the benefits of controlling the software directly from them. If you prefer using traditional turntables and/or CD players you will still need to use a Native Instruments sound card but if you are using HID CD players and/or a MIDI controller there is no need for one. Simply plug your computer directly into the Sixty-Four or Sixty-Two and set up the routing options in the preferences of Traktor. Regardless of the sources you use to manipulate Traktor's virtual decks the mapping and instruction provided below will turn your Rane mixer into a badass integrated Traktor controller.

For more information about setting up Traktor with HID compatible decks, read our We Love HID blog post.

As previously mentioned, if you are using DVS you will still need to use a Native instruments sound card but if you are using HID CD players or MIDI controllers you can route the audio from Traktor directly to the Rane mixer. This will require the use of Core Audio (Mac) or ASIO (PC) drivers that can be downloaded here:

Note: If you are using DVS with a Native Instruments sound card you do not need to install these drivers. Simply plug the NI sound card into the Sixty-Two as you would with any DJ mixer.

Once installed follow these instructions to route Traktor's audio to your Rane mixer:

You can download a larger version of either mapping image here:

Additional note: Make sure the "User Button Lighting" option is checked within the Sixty-Two's Preference Pane through System Preferences (Mac) or the Control Panel (PC). This will ensure the lights that represent Cues present in Traktor will stay on when the cue is triggered from the mixer.

Now you are ready to enjoy using Traktor software with one of the best mixers in the world.

FOR MORE INFORMATION AND TUTORIALS ON TRAKTOR CHECK OUT DJ TECH TOOLS WEBSITE.