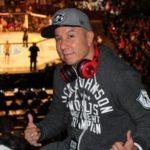 Over the past few years, the UFC (Ultimate Fighting Championship) has held events in dozens of countries and nearly every State within the United States. Providing the soundtrack for fight fans along the way has been AL3, a proud and long time user of Rane mixers.

AL3 (Albert Lineses III ) joined the production team for the UFC in 2009 , however, AL3 was a force to be reckoned with before that time. Hailing from  Phoenix,  Arizona,  he started his DJ career as a young buck and worked his way from small parties to local clubs and eventually earned his way into the regional DMC battles. Later on, his turntable and party rockin’ skills helped make him a staple in the Vegas nightlife scene. Marquee, Pure, LAX, Rain, The Bank, Tao, Moon, The Playboy Club, Noir, Cathouse, Christian Audigier, VooDoo, Jet and Studio 54 are to name but a few Nightclubs he's performed in. Three quick AL3 facts:

Always a focused and dedicated individual, AL3 set his sights on some larger gigs (the kind of gigs we DJ's dream about). Soon he found himself as the Official DJ for the Sacramento Kings. He was a natural at keeping the crowd energy elevated for each and every home game. Quickly, his schedule increased with out-of-town gigs, private parties and greater exposure to the elite within the sports and entertainment industries. AL3 has been booked to perform at celebrity events like, Criss Angel & Holly Madison’s birthday party, Penthouse Magazine’s VIP Party with owner Marc Bell and Pet of the Year, Heather Vandeven, Dana White’s Saint Patty’s Day Bash with House of Pain and E! Reality TV Star Holly Huddleson’s VIP Party.

A brief encounter with UFC President Dana White (and the fact that AL3 had a special demo in his pocket) led to a busy and rewarding new position as the Official DJ for the UFC.

I recently had the chance to join AL3 in Vancouver, BC, to document the behind-the-scenes action at UFC 174.

It was typical Northwest weather (overcast) as I drove from Rane Headquarters in Mukilteo, Washington up to Vancouver, BC. A few hours and several mochas later, I arrived at an upscale hotel in downtown Vancouver to pick up AL3. On the quick ride over to Rogers Arena, we chatted about music and I commented on the sweet accommodations. "The UFC treats us like one of the family. They work hard to ensure our comfort and convenience on the road, they respect what we do and that's why we love what we do so much", he responded with a smile.

Parking was not a problem, it's three hours before the doors open to the public but the production crew has been working hard in final preparation for the evening's Pay-Per-View event. We arrived in the production suite and after a round of friendly hellos from the entire crew, we began, as most DJs do, finding a spot to set up the gear. On this rare occasion, all of the DJ equipment hadn't been delivered to the production suite. We trekked down to the staging area to track down the missing pieces of his equipment. A couple dozen similarly shaped black road-ready cases later and we found what we were after.

The gear of choice for AL3 is a pair of Technics, dicers and a Rane Sixty-Two mixer. Traveling the globe from arena to arena, he has to be able to adapt to whatever the situation presents. He's adept at using one turntable along with the Instant Doubles feature within Scratch Live. He also has a controller in the backpack for that rare emergency. One thing that has never wavered though, is his use of Rane mixers. After many years of being a dedicated TTM57 user, AL3 stepped up to the Sixty-Two and has been rocking it hard ever since. Connecting the gear takes us no time at all and we're now ready to pump sound to the main system. BOOOOM, the bass echos through the empty arena. A quick check in the headset (for communications with the production team) and everyone is satisfied.

Most DJ's understand it's always a challenge to mix when someone is talking your ear off. AL3 has to contend with the entire production team chatting back and forth, hitting their lighting cues, swapping camera angles and who knows what else. Toss in the tricky acoustics of arenas / stadiums and you can begin to appreciate the work that he does. Most of the venues are new to him and his experience shines every time, delivering flawless mixes and precise scratches for the masses.

If you've attended a UFC event in the past few years, you've probably done a little bit of dancing too. Music mainly leans towards the EDM side, with some classic hip-hop and rock tracks teased in. Not content to be an average DJ, AL3 does his homework. He is constantly digging up music from artists in the cities he visits, selecting special songs for fighters on each card and even making sure to slip in a track from some of the many music celebs he spots in the crowd. When a fight ends quickly, it's AL3's job to keep the people happy during the long lulls between scheduled bouts.  So, next time you see the camera panning on the celebs grooving in the front row between fights, you know AL3 is dropping it hot.

One hour before doors open and the catered lunch is ready for us to devour. We arrive upstairs in true style to find a grand feast waiting. I've shadowed AL3 in a few cities and I must say, Vancouver had THE BEST catering. Just another perk of being the DJ for the UFC. Choices included salmon, artichoke pasta, steak, salads, veggies, breads, and so much more. I went for the tables covered with fresh fruits and brownies. Another bonus of being the DJ is, you get to rub elbows with all of the on-screen talent that fight fans are familiar with. From my experience, everyone with the UFC is excited to see AL3 walking into the room. They love the energy his music provides and you can see it reflected in their faces. When AL3 asked the UFC President, Dana White (a very busy man on event day), to come snap a picture with me, he came over to greet AL3 and I was treated like absolute royalty by Dana.

Ten minutes now until the doors open and it's time for AL3 to get started. Like a good DJ does, he keeps the tempo subdued and the vibe light as people start to fill Rogers Arena. To our right, pre-fight commentary airs on TV, while AL3 throws down some melodic scratches. As more people fill the arena, I can feel the energy and the beats rising. "Ten minutes" crackles over the headset. It's now time to turn it up a notch. "Five minutes". By this point AL3 has launched into a set worthy of a Red Bull Thre3style Championship. The final countdown in the headset begins and with some on-point mixing, the energy is about to burst. Suddenly, the arena goes dark, he hits his mark and the music drops. Bright as day from the many jumbotron screens in the arena, appears the UFC logo, signaling the beginning of the event. The crowd in Vancouver, BC goes wild; it's now the job of AL3 to carry that energy all the way until the main event.

As luck would have it, most of the bouts this night went the distance, leaving small seven minute chunks between fights for AL3 to strut his stuff for the fans in Vancouver. "That's one thing that you have to be prepared for. Sometimes you get 20 minutes, other times you get five. Either way, you have to be ready to carry the momentum, or in this case, reinvigorate the crowd" he said. The main event was upon us and AL3 is searching his library for just the right song to play depending upon the outcome. Many DJs would agree, track selection makes all the difference.

The main event lasts the full five rounds but it is no mystery who should be walking away with the judges decision. Like a hawk, AL3 picks up on this and gets his next track loaded. As soon as the decision is read and the title belt wrapped around the winners waist, AL3 launches into his carefully selected song. Everyone in the production booth lets out a sigh of relief, the event is over. The crowd files out of the arena and AL3 drops the tempo back down to bring the night to a close. The cleaning crews are out on the floor and it's time to pack up the production booth to ship off for the next event. This DJ job comes with a lot of travel, lots of days on the road and a never ending stream of new venues. Luckily for fight fans, AL3 is always up for the task.

Learn more about AL3 by visiting:

Article and Photos by Chad Simer