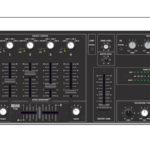 In The Beginning: Rane's Introduction to the DJ Industry

Rane first entered the DJ mixer market upon request from Richard Long of Richard Long & Associates (RLA). Richard Long was a famous sound designer for the biggest names in disco. He designed systems for Paradise Garage, Studio 54, Annabels (London), Regines (a chain of 19 clubs scattered around the world from Paris and New York to Cairo) and many others that were the vanguard of the disco era.

Richard approached Rane and asked them to redesign his famous X3000 crossover using their proprietary technology. This became the X3000A, built exclusively for Richard Long. They also codesigned a DJ equalizer called the Q5000.

Based on his successful relationship with Rane, Richard Long persuaded them to research the DJ mixer market. They did and produced their first DJ mixer, the MP24 which rapidly became the industry standard, installed in clubs around the world for almost 20 years.

Functionality issues on the MP 24 series vary widely. The original MP 24 did not have a switchable booth output ducker, nor could the output level be adjusted as much. These features received immediate attention. The MP 24x is the first version to use the VCA controlled Active Crossfader assembly. The "x" and "z" type crossfaders are not interchangeable. See theCrossfader Replacement Chart for applications and part numbers. The "constant power" (dip in the middle) crossfader circuitcannot be changed to that used later in "z" version.

The Evolution of the MP 24

Last, but not least.....this happened

A creative genius from Arlo's Ballroom in Houston, Texas, refurbished MP 24s with a rotary modification. Here's what Arlo's had to say, "These mixers started life as 1st Generation MP24s...entirely new power supply, new audio chain, transformer-balanced outputs, plus the Bozure isolator, analog meter, and the rotary faders of course. Might be most accurate to say it's a new mixer in an MP24 chassis."